Some of the key changes affecting lot owners are:

Maintenance Plans
Additional major capital items that must be contained in a maintenance plan including common property structures, including the roof, stairways, balustrades and window frames, shared services, fences, pools and water tanks.

Membership of Committee
A Committee can resolve that a Committee Member is to cease holding office if they are absent 25% or more from committee meetings without reasonable explanation within any six months period. This will be a useful tool for Committees with inactive members whose non-attendance impacts quorum and decision making. The active members can seek to reduce the size of the Committee without having to wait until the next general meeting.

Changes in the Model Rules
• A Committee can appoint members to a sub-committee without reference to the Owners Corporation. (Previously sub-committees could only be formed if the special rules permitted)
• An owner or occupier of a lot must obtain the written approval of the owners corporation before making any changes to the external appearance of their lot. An owners corporation cannot unreasonably withhold approval, but may give approval subject to reasonable conditions to protect quiet enjoyment of other lot owners, structural integrity or the value of other lots and/or common property.
• An owner or occupier of a lot must notify the owners corporation when undertaking any renovations or other works that may affect the common property and/or other lot owners’ or occupiers’ enjoyment of the common property.

Melbourne Owners Corporation Services (MOCS) would like to take this opportunity to inform lot owners that our office will be closed from 24th December 2018 and re-opens on 7th January 2019. During this time, we will not be able to answer emails as quickly as we usually do.  For urgent or emergency common area maintenance matters, please call 03 9818 2488.

Please contact our office before 21st December 2018 should you require assistance on any Owners Corporation administrative matters.

MOCS would like to wish you Merry Christmas and a Happy New Year. 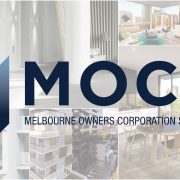 From early in the 1990’s, aluminium composite panel (ACP) has become a standard material for medium and high-rise buildings across Australia. It revolutionised the building sector by providing a low-cost, aesthetically pleasing skin or layer that was easy to attach to a building’s framework.

Benefits of this cladding included its ability to stop wind and rain entering a building, sound and thermal insulation as well as fire resistance. In addition, it was required to meet minimum standards under the Building Code of Australiai.

In the aftermath of the disastrous Grenfell Tower fire in London on 14 June 2017 and the Lacrosse building fire on 25 November 2014 in Melbourne, questions are now being asked regarding the viability of cladding, and potential impact across Australia given the significant growth of multi-dwelling developments.

On 6 September 2017, the Australian Senate Economics References Committee recommended that the Federal Government implement a number of measures, which include:ii

END_OF_DOCUMENT_TOKEN_TO_BE_REPLACED

With the state government about to “do an Uber” on short-term and holiday letting, apartment owners need to get their act together if they don’t want to be swamped by frolicking families, bucks night parties and footy fans on a weekend spree.

A couple of weeks ago, a NSW Legislative Assembly committee held hearings into legislation governing short-term and holiday letting in NSW.

Seeking a legal structure for allowing but controlling short-term letting is a response to its upsurge, led by the monolithic online holiday let agency Airbnb.

A couple of weeks ago, a NSW Legislative Assembly committee held hearings into legislation governing short-term and holiday letting in NSW. Photo: Shakespeare

Make no mistake, this government likes “sharing economy” entities such as Airbnb and Uber, the latter already having been given a free kick to take on the taxi industry.

Next up for sharing without caring could be your apartment block where your neighbours may soon find it legal to let out their units for a few days at a time, often for more than they can get from a permanent tenant for a whole week.

It’s impossible to predict what specific form the changes will take, but variations on the proposal by City of Sydney Council seem a likely outcome.

If I’m reading it correctly, CoS proposes only requiring change of use to holiday lets to be registered as a complying development – with no need for formal approval –  while limiting the number of days a year that a property can be let on a short-term basis.

However, apartment blocks that didn’t want short-term lets could still ban them through their by-laws.  “If made exempt development, an owner’s corporation are not prevented from establishing by laws that could further manage this activity,” say City of Sydney in their submission to the inquiry.

That, however, is open to interpretation.

“The Strata Schemes Management Act 1996 provides that no by-law is capable of operating to prohibit or restrict a dealing with a lot (section 49),” says the official submission from the Premier’s Office. “This means that an owners’ corporation cannot seek to restrict a lot owner from offering short-term accommodation in the owner’s lot.”

But not everyone agrees. Leading strata lawyer Suzy Broome of Sachs Gerace Broome says: “Our view is that … a by-law in a residential strata scheme that requires tenants to be subject to a residential lease of no less than three months is binding and enforceable.”

Dr Cathy Sherry, senior lecturer in law at the University of New South Wales, is not so sure: “If I were being cautious, I would say that by-laws banning short-term letting are invalid. That said, I completely understand why buildings want to do it.”

The practical reality is that Owners Corps can and do restrict short-term lets, provided the building is already zoned residential. But if you don’t already have a by-law restricting short-term lets, you need to get one in while you can.

Most apartments in NSW are owned by investors but, thanks to apathy and proxy farming, a minority of owner-occupiers can pass by-laws without too much trouble.

However, if even 25 percent of the owners in your block are attracted by the juicy bait of extra income, they will be able to block new by-laws.

That same 75 percent threshold will prevent greedy investors from erasing existing by-laws that get between them and their pot of gold.

Whatever changes the government eventually makes, they are unlikely to remove the right of strata owners to create by-laws and run their buildings the way they want.

But if you don’t want short-term lets in your building, you need to act now.